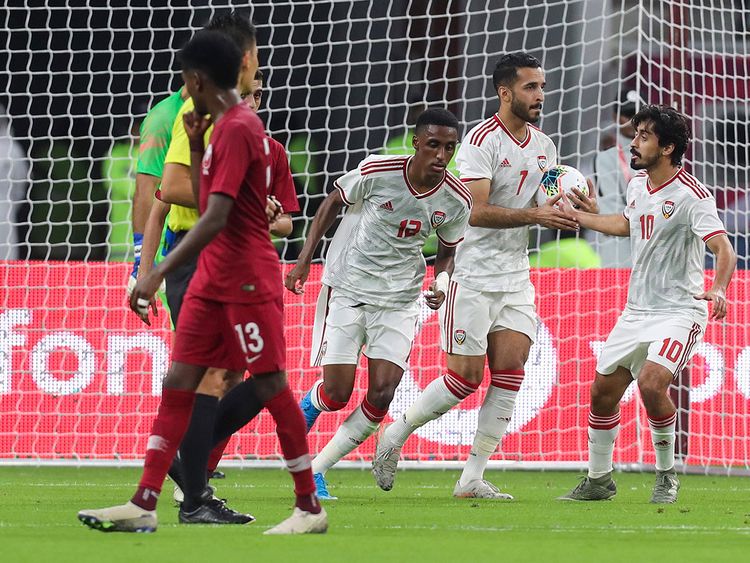 Dubai: They may not have a further role to play in the ongoing 24th Arabian Gulf Cup but, despite making a premature exit, Bert van Marwijk should be looking to the future with confidence after his UAE side showed great courage during last night’s 4-2 defeat by AFC Asian Cup winners Qatar.

Valiant is the word to best describe the UAE’s efforts on a day the country celebrated its 48th National Day. Apart from the entourage of team officials that accompanied them to Qatar, the Whites did not appear to have any kind of support inside Doha’s Khalifa International Stadium, which was packed to the rafters and housed a partisan crowd that threw its weight fully behind the tournament hosts.

Furthermore, the UAE may not have had the physicality, particularly when it came to player height, to compete against an internationally assembled Qatar squad, but the Emiratis were not short in terms of heart, and fought until the very end.

Having followed up the 3-0 victory over Yemen in the campaign opener with a 2-0 defeat by Iraq in their second game, the UAE’s task was made tougher by Qatar, who drubbed Yemen 6-0 after losing 2-1 to the Iraqis in their opening game. And while Qatar needed a draw to go through, the UAE had to win to go forward.

Both sides spent the early moments getting a measure of the other but Qatar were the first to make inroads and two minutes after UAE goalkeeper Mohammed Al Shamsi used his feet well to block Almoez Ali from close range in the 18th, Akram Hassan Afif capitalised on a UAE defensive error and placed between Al Shamsi’s legs to put the hosts ahead.

Afif made it 2-0 from the spot in the 28th after Qatar were handed a penalty via VAR for Mohammed Al Menhali’s handball just inside the box. It was harsh, but after a lengthy consideration the referee drew a box with his hands and pointed to the spot.

In a form of poetic justice, the UAE pulled one back in the 33rd through Ali Mabkhout, who successfully converted the penalty awarded for Bandar Al Ahbabi’s hacking down in the box by Qatar goalkeeper Saad Al Sheeb as the industrious midfielder tried to round him.

The UAE were livelier in the second half, but Qatar managed to add a third to their tally through Hassan Al Haydos, who powered home from about seven yards out. Far from being outdone, the UAE continued to press and were rewarded in the 77th when Mabkhout scored again and nearly added a third but for Al Sheeb, who showed a strong pair of hands to thwart late on.

Boualem Khoukhi headed home in the fourth minute of time added on to round off the scoring.

The other Group A game saw Iraq and Yemen play out a goalless draw, meaning the Iraqis will join Qatar in the knockout rounds.

– The writer is a sport journalist based in the UAE

Dubai to be a stop on my farewell Tour in 2020, says Leander Paes