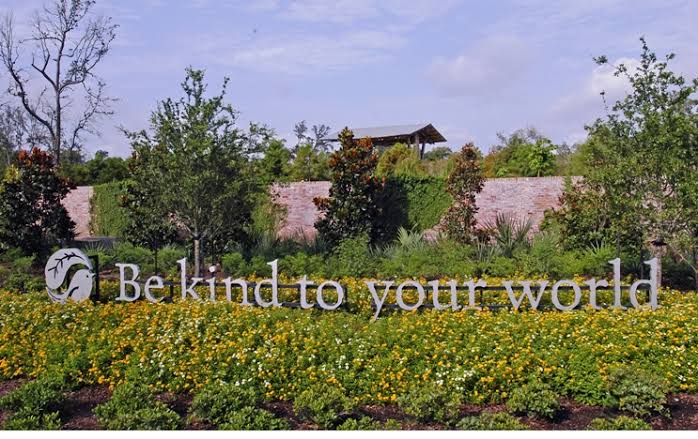 “Be Kind to Your World”.

That huge board at the entrance of “Shangri La Botanical Garden and Nature Centre” at Orange, Texas, USA said it all; and perhaps more.

The ‘crescent and star’ meaning a new life, was the emblem of Lutcher and Moore Company’s tower. Once, they had timber yards extending 2, 60,000 acres in the vicinity of Sabine River. Soon, deforestation had its impact on the climate.

Lutcher Stark’s idea of the environment, ecology, and deforestation took a turn for good. The catalyst for this transformation was the book ‘Lost Horizon’ by James Hilton, published in 1933. This book is about a mystical village named Shangri-La in the Himalayan Utopia.

After a long 9 years of planning, he opened a botanical garden in 1946. Besides thick forests, cypress-tupelo swamp, and wetlands, a large lake completes the ecosystem. Over 300 plant species and blind bird heronry are waiting for you. We were startled by a strange sound; a rattlesnake went leisurely under our feet. Their sharp scales under the belly of the snake produces rattle like sound while moving in rough surfaces.  A series of climatic vagaries like hurricane Rita, Ike, and snowfalls made frequent closure of this beautiful place.

The grown-up tree in the garden looked familiar, but the name board said’ Nux Vomica– a highly sour fruit-bearing medicinal plant. That was Kanjiram. Another well-cordoned shrub bore the named ‘Touch me not’. The most surprising exhibit was a bush with a long description ‘Garcinia Cambogia – the most effective cholesterol /weight controller.’ The capsule from the fruit of this plant is sold in the USA at almost a dollar apiece. And it turned out to be what is known in India as Kodam Puli or Kokum.

Garcinia gummi-gutta tree in Kerala, India.
Suddenly Sarah, the college-going volunteer guide, pointed out at a small cat-like an animal with its offspring on its back near the Jetty. She explained that it is an Opossum, a Kangaroo like creature having a bag to carry their offspring.

The statue of Lutcher has this thought-provoking inscription” I am working with nature, trying to paint this scene with the most beautiful colours, nature will give me.”

In the 9th century, Caddo aboriginals occupied present-day Texas. The Caddo word Taysha (meaning friends) is the origin of Texas. Taysha is pronounced as Tejas.

There was a Stevia tree, the extract of which is sweeter by 300 times to that of sugar. The lake was full of frogs of different varieties. The name the one species stuck us most” frogs from the Kurchiyarmala peak, of Wayanad.”

We could hear the howling of Coyote Jackal in the wild.

The boat driver, 75, wore typical Cowboy dresses- flat cap, boots touching knees, wide feather belt. During the boat ride through the Adams Bayou, the tributary to Sabine River, Mullet, and Halibut fish were seen. Halibut is born with two eyes, but as it grows, one eye will be merged with the other to increase the sight. The shadow of the northern crested caracara eagle fell on the boat, and the halibut just vanished.

A huge oak tree supposed to be over 1213 year old was lying in the water. Perhaps it was uprooted in flood or due to lightning. The water was grey due to the preservative Chemical Tannin percolated from the Oak trees.

The Spanish moss was a real surprise. Unlike parasitical plants, the rootless epiphyte grows on the surface of a plant and derives its moisture and nutrients from the atmosphere. They are used for cushion making.

The boat returned before the Beaver dam, the dam made by ‘the engineer of the forest,’ a mammal called Beaver with its chisel-like teeth.

Yes, Shangri-La is all about survival, nature, and rejuvenation.

The professional awards jury of 2012 has commended about Shangri-La “Everywhere you turn something special: the vernacular and reuse of materials; the graceful, curving paths; and the way the amenities are well connected. This has educational elements to teach us about water and the elements of beauty, art, and colour.”

The Nelda C and HJ Lutcher Foundation were established in 1961. Lutcher died in 1965. Nelda died in 1999. And by a strange coincidence, the BBC rediscovered that mystical valley Shangri La in Tibet the same year.

Beaver is the national animal of Canada

“…I determined to gather together all things of beauty and culture that I could and preserve them here against the doom toward which the world is rushing…the world must look for a new life.  And it is our hope that they may find it here.”   (James Hilton, Lost Horizon)

Emirates prepares to fly again, flights to India by July 30

Not so pleasant faces behind bull fighting